Why should you study conflict, violence and peace at the University of Michigan?

With many institutions to choose from, that is a really good question.

Here are three reasons why you should choose Michigan.

Photographer: Hillary Nichols
With 13 faculty specializing in political conflict, violence and peace, the University of Michigan (UM) has one of the largest constellations of conflict and peace scholars in the United States.

Why do you want a large number?  Well, most political science departments only have a few individuals and this forces them to specialize on only one or a few topic areas.  UofM does not have this problem.  We are one of the largest and most diverse departments in the country, in terms of subjects covered and methodologies applied to examine them. We combine this broad scope with a commitment to high quality, sophisticated scholarship.

A balance of breadth and depth is important because of changes in the field and world around us. At a time when conflict research is expanding beyond the traditional core areas of interstate and civil war, and toward a more expansive set of theoretical and empirical problems -- like human rights violations/state repression, protests, protest policing, insurgency, counter-insurgency, prisoners of war, ethnic conflict, terrorism, sexual violence, and the complex connections between them -- the diversity at UofM is extremely important.

Michigan's depth includes scholars specializing in international relations at the macro-, cross-national level, as well as a new critical mass of scholars studying the micro-foundational dynamics of conflict at a highly disaggregated, subnational level. Our researchers are interested in factors that promote/hinder the onset, severity, duration and re-occurence of behavior at all levels of aggregation (e.g., a village, a city, region or a group within a nation by the year, month, week, day and occasionally hour).

While Michigan is diverse in interests and approaches, there are also several core areas of specialization.  For example, a large number of faculty focus on topics of human rights violation/state repression, ethnic-religious and group conflict, protest and peace, as well as somewhat smaller concentrations in atrocities/genocide, civil war, coups, cyber conflict, electoral violence, interstate war, protest policing, rebellion, sexual violence, terrorism and movement between inter and intra-state conflict.  This provides an incredibly rich environment with which to bounce ideas, collaborate, reflect and create. This also creates an incredibly stable environment because if one, two or a few faculty receive awards, go on leave or conduct field research, the larger program continues to thrive without losing momentum.
Not only are the substantive topics of interest varied among faculty at UM, but there is also great variation in methodological orientations found within the department.  A large concentration of faculty employ cross-national and (more recently) subnational analyses, game theory, archival research and content analysis (human as well as automated/machine-assisted). There are also smaller clusters working with experiments, interviews/ethnography and satellite imagery.  These combinations make for an amazing setting to share/create scholarship.

Among the more important strengths of the University of Michigan is the fact that it currently has one of the largest group of graduate students interested in conflict, violence and peace.  Many of our graduate students have interests in human rights violation/repression and rebellion, while others study atrocities, civil war, counter-insurgency, peace, protest, protest policing and terrorism. Methodologically, a large concentration of graduate students is focused on subnational conflict analysis. Reasonable groupings also exist in cross-national conflict, experiments and ethnography.  There are also smaller, but robust communities employing satellite imagery, game theory and content analysis.

The University of Michigan's political science department has a long tradition in the study of conflict, violence and peace.  For example, in 1957
Our connections to the creation and development of modern political conflict/violence studies is significant:

The editorial work on the Journal created an interdisciplinary community of scholars at the University of Michigan interested in issues of war and peace—including, significantly, several specialists in international relations. This group became the nucleus of the Center for Research on Con ict Resolu- tion, which was established at the University of Michigan with the enthusiastic support of its Vice President for Academic Affairs, Roger Heyns—who also happened to be a social psychologist. On a personal note, I joined the Center in 1962, when I came to Michigan on a joint appointment between the Department of Psychology and the Cen- ter for Research on Con ict Resolution.

The Research Exchange, the Journal of Conflict Resolution, and the Center for Research on Con ict Resolution that evolved from it were part of an emerging peace research movement in the United States, Europe, and Canada during the 1950s. In my analysis, a major impetus to the development of the movement in those years came from the convergence of two strands, loosely corresponding to two groups of scholars that recognized their interdependence: scholars from elds outside of international relations—such as economists, psychologists, anthropologists, as well as occasional physicists, biologists, or mathematicians—who were interested in applying the concepts and methods of their elds to the study of war and peace because of their strong commitment to peace (as well as, of course, the intellectual challenge of the enterprise); and scholars of interna- tional relations (many of whom, of course, also had strong commitments to peace), who felt the need to go beyond the traditional ap- proaches of international law, international organization, and diplomatic history, and develop a scienti c basis for the study of war and peace.

The two strands needed each other in order to ful ll their potential. The non-specialists needed the specialists in order to legitimize their forays into areas in which they had not been trained, to ll in the substantive knowledge they lacked, and to provide real- ity testing for their conceptual models. The IR specialists, in turn, needed their colleagues from other disciplines as sources of concepts and methods, as well as of the validation and encouragement that they did not always receive in those days from their more traditional colleagues. The two groups thus formed.

Six years later, in 1963, the Correlates of War (COW) project was started in the department.   As indicated on the project's webpage:
​
This project subsequently led to the creation of about a dozen spin-off databases, dozens of graduate students and hundreds of articles.  Indeed, the project placed the systematic study of conflict/violence into the mainstream of political science.  This illustrious history of pioneering scholarship, education, creativity and mentorship has continued over the years up to the present day.

Today, the University of Michigan's conflict, violence and peace research community is one of the largest and most rigorous programs in the field.  There are:


The current period in Michigan's history thus continues the long-standing tradition of generating high-quality scholarship on international conflict (i.e., interstate and civil war), and has extended this tradition to include a wider variety of topic areas (e.g., human rights violation/state repression, genocide, sexual violence, cyber conflict and protest/protest policing), as well as a newer focus on subnational conflict/violence (i.e., that which explores the variation of conflict/violence/peace spatially and temporally within nation-states) and peace (i.e., activities that not only end conflict/violence but attempt to produce a broadened/deepened sense of community between human collectivities).

The faculty and graduate students at UofM are engaged in a wide variety of projects which involve writing books, articles and conducting/creating/analyzing databases, interviews, archival material and/or theoretical models.  These produce new knowledge but also facilitate opportunities for mentoring, co-authoring, instruction and community-building.  We provide some examples below.
​
Christian Davenport 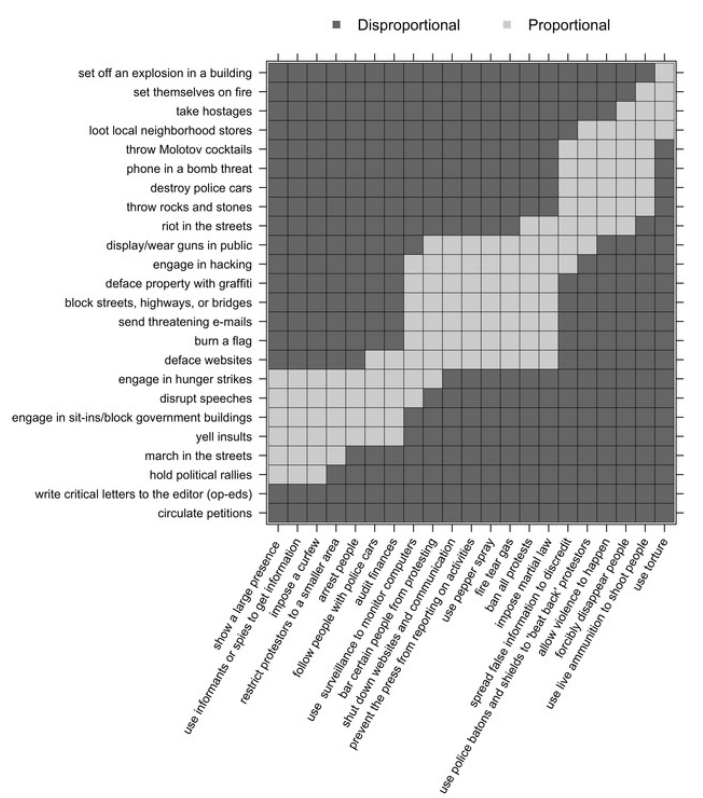 Note: The figure identifies which tactics are deemed to be proportional (i.e., equally as severe/intense) relative to others.
Mark Dincecco 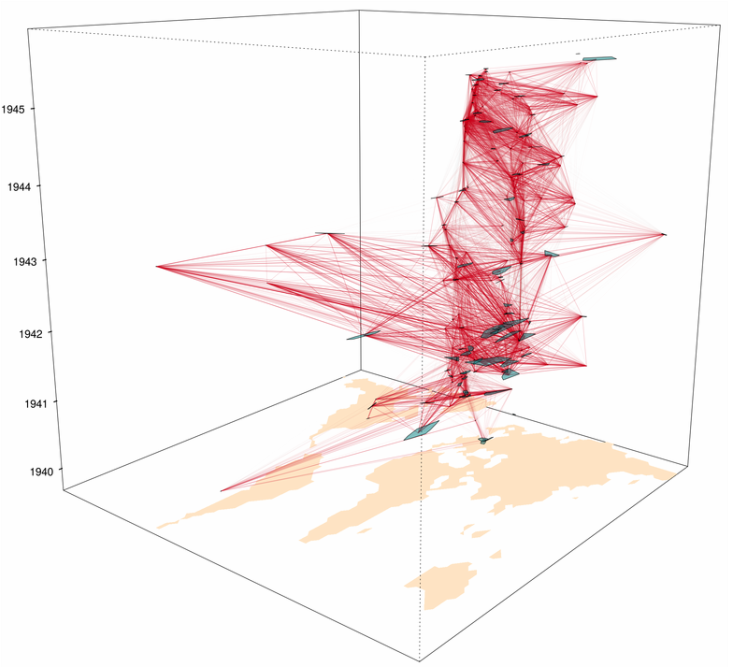 Note: This is a combination map/time-series/network plot, showing the flow of information across battles in WWII. Z axis is time, X and Y axes are longitude and latitude, polygons are locations of battles, red lines are network ties linking battles involving the same combatants. (joint work with Todd Lehmann)
Powered by